Get the ultimate edge with CheatAutomation’s ARK: Survival Evolved Hack!

Become King Of The Jungle

Become the king of the jungle with CheatAutomation’s ARK Cheat. Track every dinosaur and player with our ESP to hunt them down or avoid them, with advanced features like dino filtering, dino torpidity and more. Hunt down elusive alphas, or tame only the highest levels.

Lock on to players and dinos alike with our precision bone aimbot to maximize your damage. Bone selection including head and body aim options are available as well as other features to fine-tune your aimbot performance. 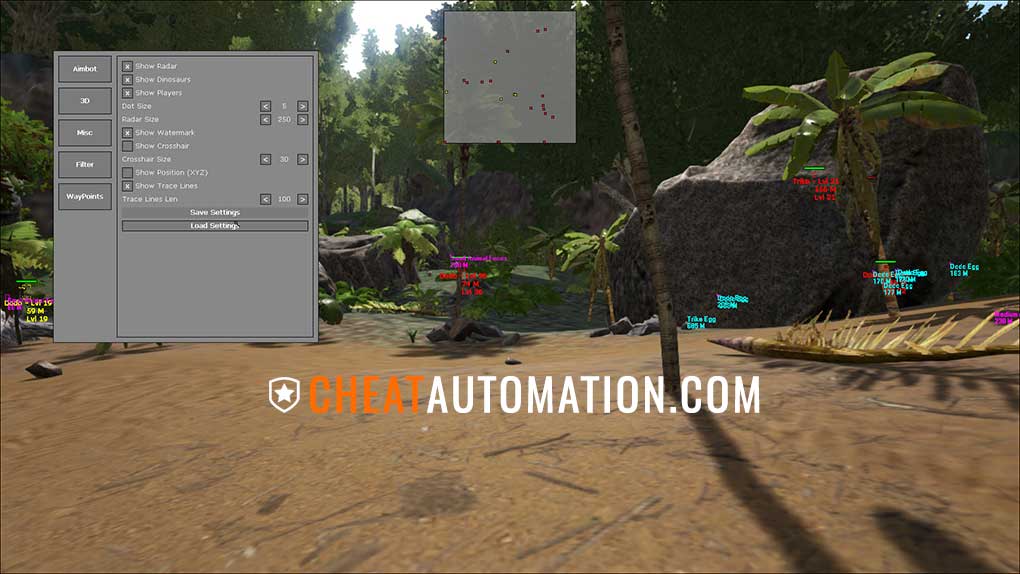 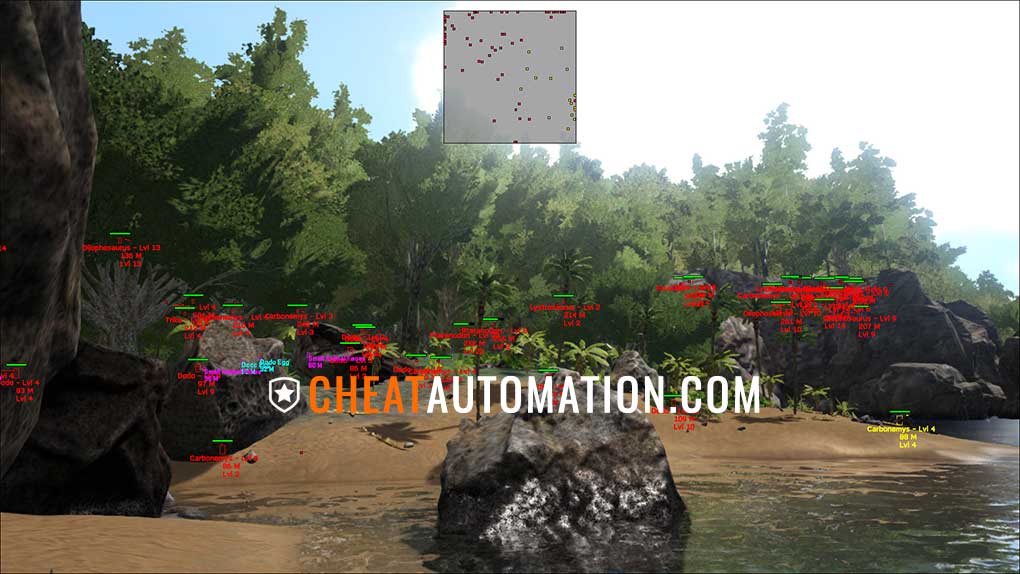 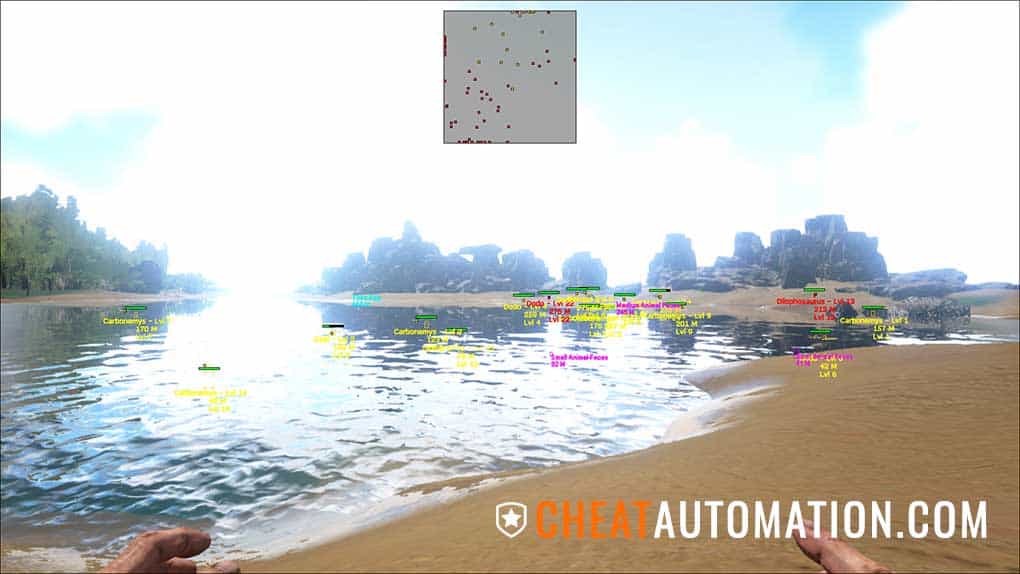 Whether you’re a solo player or play with friends or a tribe, you’ll benefit massively from our cheat. See the locations of all nearby dinosaurs, whether you want to hunt them, tame, or avoid them. Use filters like levels and types to find dinos to tame, or alpha dinos to kill. Player ESP will let you similarly hunt or avoid players, especially those on a t-rex or other powerful dinosaur. Torpidity bars let you see how close you are to knocking out a dino or player, or how soon they will wake up

This feature can be extremely valuable, and you won’t be able to play without it once you’re using it. Keep track of the exact location of your bases or supply caches by placing waypoints you can see from anywhere on the map. Mark points of interest, or enemy bases so you can always find your way to them easily. Even mark your dead body if you die, so you can find your way back to your gear or tamed dinos with ease.

Be the MVP of your tribe with our ARK cheat. Our aimbot can lock on to other players for both melee combat and with guns. Lock on to specific bones, making strafing around your opponent an easy way to avoid hits, or take perfect headshots with a gun. Our Aimbot can avoid locking on to tribemates, to ensure you don’t accidentally hit your team-mates. Our player ESP will show you exactly where your enemies are, letting you track a fast player on a raptor or flying dino, or finding that sniper hanging back with a rifle.

Become A Base Raiding Master

Assess your enemy's defenses with Turret ESP that displays key information like ammo, targeting settings, warnings, range and more so you can target weaker opponents or abuse your enemy's weak spots. ESP shows both sleeping and awake players so you can plan your attack with precision.

What Does Your ARK Cheat Do?

When injected from the Cheatautomation launcher, our ARK cheat offers a number of features through an in-game menu. These include showing information on nearby dinosaurs, players, items, structures and more, as well as our lock-on aimbot that will stick to players and help boost your accuracy. Another helpful feature included is our waypoint system, so you can save points of interest and have on-screen indicators showing where they are at all times!

What Versions Of ARK: Survival Evolved Do You Support?

We support the Steam, Epic Games Launcher, and Windows Store versions of the game.

With the Windows Store version of ARK, you can play on all servers including official servers. This is the version of the game we recommend for cheating in.

With our Steam and Epic Games cheat you will not be able to play on Battleye protected servers as we do not support this anti-cheat. This means you cannot play on official servers with the cheat in these versions of the game, only unofficial servers without Battleye enabled. For this reason we suggest playing the Windows Store version of the game so you can play on all servers!

I Want A Cheat To Play On ARK Battleye Servers.

While the Steam version of the game is very popular, it's not usually worth risking a Battleye ban to play on official servers when there is a good alternative (Windows Store version). Any cheat that would support battleye is more likely to get you banned, and will be much more expensive due to the difficulty of supporting it.

Where Can You Find Free ARK Hacks?

Currently we do not know of any free working ARK cheats. This is partly due to the game updating very frequently and causing cheats which are not updated for the latest game version to no longer work. Another reason for this is that the game uses Battleye on Steam and Epic Launcher, which is very aggressive and detects cheats quickly.

The Windows Store version of ARK was released much later, and has fewer players on PC and many more Xbox players, so it didn't get as large of a following on PC. But it's the best version to cheat on, and we support it!

Developing a high quality cheat and keeping it updated can take tens of hours to do, and that's outside of the other work involved creating a cheat launcher or injector as well as offering support when users have questions or issues. If you want the best cheating experience, you'll have to pay for it, as that can't be offered long-term for free. Bans are another issue, and usually if you get banned from a free cheat, it would have been more cost effective to simply pay for an undetected product.

Game cheats are much like paying for a subscription in a free-to-play game. You'll gain a lot of helpful advantages that make the experience more fun.

Can You Get Banned Hacking In ARK?

It's always possible to be banned for cheating in a game. In the case of ARK our cheats have never been detected by the game's anti-cheat. As we do not support Battleye we don't have to worry about detections from this anti-cheat. The ARK Windows Store version presently has no real anti-cheat and thus is fairly safe to cheat in.