Gary2018-02-01T17:46:29-08:00
By Gary Batallion 1944 Batallion 1944 Cheat, Batallion 1944 Hack, Hacking Comments Off on Hacks in Battalion 1944
With Battalion 1944 now in early access, people have had a chance to try the game for the first time. If you haven’t played it yet, you’ll find it’s something of a cross between older Call of Duty titles, and CounterStrike: Global Offensive, with two teams of 5 going head-to-head, round after round on smaller maps. With no respawns after death, you have to make every life count, as a single death could greatly cost your team, or give up valuable weapons to the enemy.

Want to dominate in Battalion 1944? With private hacks for the game, you can easily wipe out the enemy team every round, even single-handed. With ESP that lets you see exactly where your opponents are, and a bone aimbot that lets you lock on for perfect accuracy you won’t have any trouble topping the scoreboard in every match.

This feature will give you a massive advantage in your gameplay. This game rewards quick reactions and good aim, with rifles capable of one-shot-kills if you hit your opponents in the head. If you’ve played Global Offensive or watched pro players, you’ll see how effective it is possible to be if you’re highly skilled. With a lock-on aimbot, you can cut down everyone in your way. Just hit your aimkey (usually the right mouse) to lock on, then fire. The aimbot will automatically move your crosshair over your enemy to their head or another body part, letting you fire at them with precision. Of course, you can customize your aimbot through the cheat menu, adjust the field of view, smoothing, or set the aim key you wish to use. 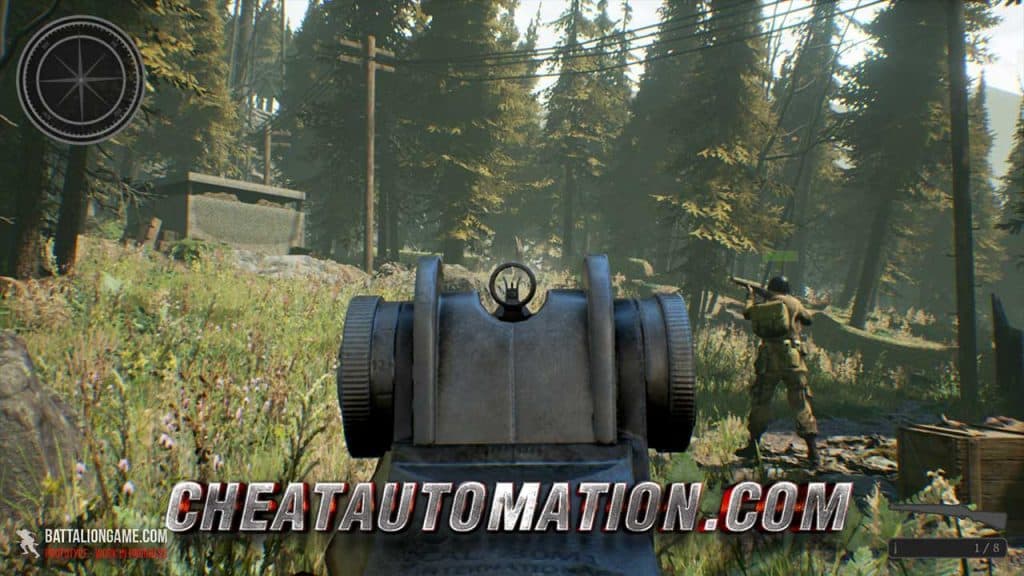 This is another major feature that will give you a huge advantage in the game. One advantage of ESP is that if you play carefully, even if someone is spectating you, they won’t be able to tell you are cheating. Of course, you have to be careful not to make it obvious you can see where other players are. ESP draws boxes and other information around other players on the map, letting you see them behind walls or other objects. With this help, you have no excuse for poor play. With this information, you can easily set traps and ambushes for other players, and make sure you’re aiming right at the door or area they’re about to walk through. ESP features can be customized in Battalion 1944 hacks, so you can decide to show nametags, health information, boxes and much more, depending on the cheat.
ESP Cheat Features:
If you’re looking to decimate every opponent you come up against in Battalion 1944, a cheat is going to be your #1 choice. You could spend hundreds of hours trying to improve in the game, but who has time for that! If you’re interested in hacking this game, sign up to our site for more information in the future!
All Department